Jawala Ji or Jwala Devi temple is one of India’s 51 Shaktipeeths and is regarded as one of the most sacred Shakti temples in the country. It is located in the “Kalidhar” valley of the Shivalik mountains in Kangra. This is thought to be the first temple the Pandavas have ever constructed. Jwala Ji is a Jawala Mukhi, Kangra, Himachal Pradesh temple dedicated to the “GODDESS OF LIGHT.”

The location of the current Jwala Devi Temple is believed to be where Sati’s tongue is said to have fallen. Holy Flames or Jwala, which are constantly blazing, is a representation of the Tongue of Sati. Jwala Devi Temple is a singular and unparalleled place of worship. There is no idol or deity worshipped. Since ancient times, it has had a sequence of natural fires, known as Jyotis, which are considered the goddess’s sign. Jawala Ji is a fantastic heritage site for people all around the world, not just those in Jawala Mukhi, Kangra, or Himachal Pradesh. Every year during the Navaratra holiday, colourful fairs are held from March to April and from September to October. 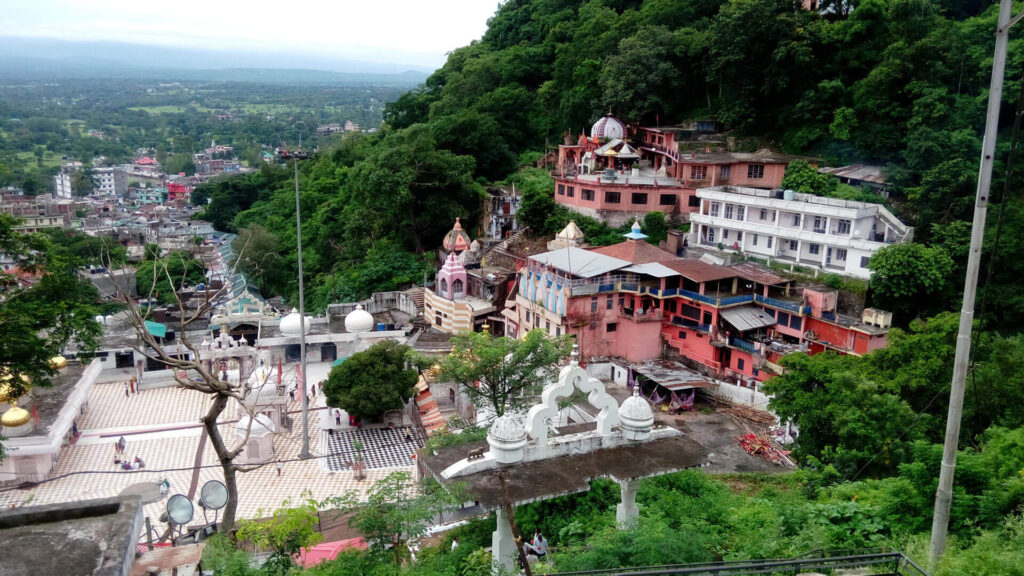 History of the Temple

Legends from long ago describe a time when demons ruled the Himalayan mountains and tormented the gods. The gods, led by Lord Vishnu, were determined to eliminate them. Huge flames emerged from the earth as they concentrated on their strengths. A young girl was born from that fire. She is known as Adishakti, the original “shakti.”

She was raised in the home of Prajapati Daksha as Sati or Parvati and later evolved into Lord Shiva’s wife. When her father insulted Lord Shiva, she committed herself since she could not deal with it. Lord Shiva’s fury at learning of his wife’s passing knew no bounds, and while carrying Sati’s body, he started prowling the three worlds. The other gods begged Lord Vishnu for assistance as they quavered in the face of his fury. A hail of arrows fired by Lord Vishnu struck Sati’s body, severing it in half. The 51 sacred “shaktipeeths” were created at the locations where the pieces collided. “At Jawalaji (610 m), Sati’s tongue fell, and the goddess is apparent as small flames burning faultless blue through crevices in the old rock.”

It is believed that a cowherd discovered that one of his cows was consistently lacking milk decades ago. To determine the reason, he followed the cow. When the girl emerged from the forest and drank the milk, she vanished in a blaze of light. The cowherd travelled to the monarch and related the tale to him. The story that Sati’s tongue had broken here was known to the king. The king attempted in vain to locate that holy place. The cowherd went back to the monarch a few years later to inform him that he had seen a flame blazing in the mountains. The king discovered the location and saw the holy flame. There, he constructed a temple and set up regular worship by priests. The Pandavas are thought to have repaired the temple after their later arrival. This assertion is supported by the folk song “Panjan Panjan Pandavan Tera Bhawan Banaya.” The temple was built by Raja Bhumi Chand.

Other Temples to visit nearby

Maa Jawala Ji Temple is located a mile distant from this Temple. An eight-armed Goddess statue made of stone can be found at this old temple. This is adjacent to several smaller shrines. Numerous locals and visitors from different regions of Himachal Pradesh come to this temple to pray to Maa Ashtabhuja. People who come here to pray with a strong conviction never leave empty-handed.

It is commonly referred to as “Teda’ mandir and is still standing in 1905, despite the earthquake. The original temple is reported to have been built by the Pandavas, and Rama Laxman and Sita are said to have stayed here. On a hilltop above Maa Jawala Ji Temple, this temple is roughly 3 miles away. Tara Devi Temple serves as the access point to Teda Mandir.