Beautiful hill towns and exciting festivals go well together. Here’s to the Kullu Dussehra, one such festival held in a stunning setting. To put it mildly, this much awaited weeklong extravaganza is rather amazing! People from the Kullu Valley rejoice and celebrate the victory of good over evil every year at Dhalpur. Kullu’s Dussehra festivities are entirely distinct from those throughout the rest of the nation. Celebrate this dussehra in Kullu while you stay at our destination resort in Himachal Pradesh. 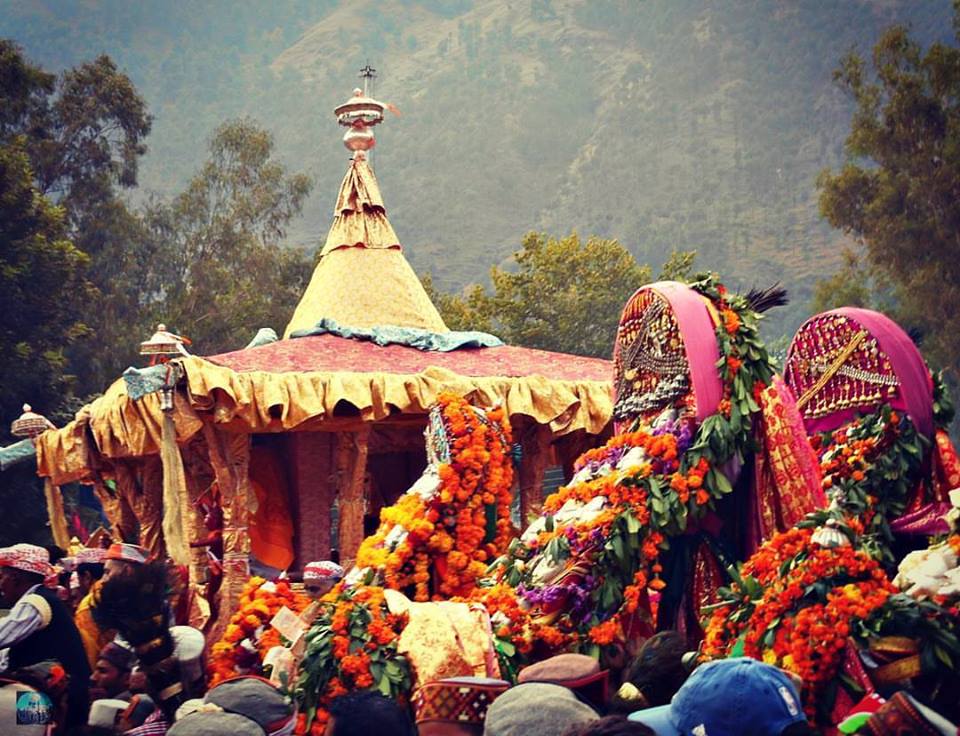 The 17th Century is the basis of Kullu Dussehra‘s historical context. Legend has it that Raja Jagat Singh was the monarch of Kullu. It’s claimed that he heard about Durga Dutt, a woman who allegedly owned stunning white pearls. He felt an urgent desire to possess the pearls. Durga Dutt did his utmost to convince the King that instead of having pearls, his greatest commodity was knowledge. All of his pleading, though, was in vain. In order to curse the Raja, he had to put himself and his family on fire and say, “Whenever you eat, your rice will appear as worms, and your water will appear as blood.”

Recognizing the gravity of the situation, the Raja followed a Brahmin’s counsel that the curse could only be lifted by obtaining a deity of Lord Raghunath from Ayodhya. A search party found the Brahmin when he was stealing the deity from Ayodhya. The deity was destined to travel to Kullu, and the people of Ayodhya made vain attempts to retrieve the deity. After months of Raja Jagat Singh praying through the night to end his misfortune, the idol of Raghunathji was finally set up. He eventually was able to break the curse and made the announcement for the yearly celebration of Dussehra, which is still going strong today. With music, dance, vibrant decorations, and a captivating atmosphere, the festivities became a representation of happiness and abundance in the state.

Who Gets a Special Invitation?

In Himachal, the Pahari communities have their own indigenous deities they refer to as “Devtas.” Every town has a unique deity that they worship in this place. These Devtas, who have their roots in the very foundations of distinct regional cultures, have strong dominance over the populace. They are thought to be the exclusive guests for this particular event, and they walk with Lord Raghunath during all the processions.

How is the festival celebrated?
It’s a festival like no other. Up until this point, it has continued to draw tourists. In order to meet Lord Raghunath in the temple, the Kullu worshippers go through a procession carrying the idols of various Gods from their homes on their heads. On the day of Dussehra, hundreds of Devtas are brought to the temple grounds.

Kullu Dussehra underwent significant modifications throughout the years, and as a result, it is today a more commercial celebration than it was in the past. To see the lavish celebrations of Dussehra, a lot of tourists from around the world visit Kullu. The celebration is attended and participated in by people from the other Himalayan states as well. The final day is significant symbolically. In order to symbolise the destruction of Lanka and the ultimate triumph of good over evil, devotees gather a pile of wood and light it on fire.

The devotees carry out all of the Devata palkis in the morning and travel to Raghunathji’s temple with a band of their traditional musicians. They receive a Phagu from the temple on their behalf (a long yellow coloured piece of cloth). they arrive at the Praul then (the main gate of Tharah Kardu in the palace). For the day’s procession, the primary deities remain there.

All of the rituals that were to be carried out before Raghunathji are finished by afternoon. The statues of Raghunathji and Sita are put in a palanquin and decorated with flowers and exquisite clothing upon the Raja’s arrival. The deities’ bands of musicians, priests, and kardars are said to remain on the left, the right, and the backside of the Rath, respectively (manager of a Devata). The statues of Rama and Sita are set in the rath upon arrival. The senior royal family representative then taps the rope that is fastened to the rath.

Positive energies start vibrating within you as soon as the devotees begin singing “Jai Siya Ram, Jai Hanuman” and begin tugging the rath. The experience of being in the presence of Himachal’s Devtas, or gods, cannot be put into words. The rath is then brought to the lower ground, where it is positioned in the ground’s middle for the duration of the Dussehra festival.