Dharamshala is a municipal corporation city in the Kangra Valley’s upper reaches, surrounded by a deep coniferous forest dominated by tall Deodar cedar trees. McLeod Ganj, Bhagsunag, Dharamkot, Naddi, Forsyth Ganj, Kotwali Bazar (central market), Kaccheri Adda (government offices such as the court, police, and post), Dari, Ramnagar, Sidhpur, and Sidhbari are among the suburbs (where the Karmapa is based). This location is also known for the Himachal Pradesh Cricket Association Stadium, built in 2003 to provide the opportunity for the state’s youth to train for a future in cricket. The Dalai Lama’s residence in McLeod Ganj is located in the valley’s upper reaches. The Tibetan exile administration was formed in Mussoorie, India, on April 29, 1959, by the 14th Dalai Lama (Tenzin Gyatso). The Central Tibetan Administration (CTA) was relocated to Dharamshala in May 1960, making it the epicentre of Tibetan exile in India. Following the Tibetan uprising in 1959, Tibetan refugees flocked to follow the 14th Dalai Lama. Thanks to his presence and the Tibetan population, Dharamshala has become a popular tourist destination for Indian and foreign visitors, particularly scholars studying Tibet. Plan your stay at our Rakkh Resort in Dharamshala and witness this majestic International Cricket Stadium. 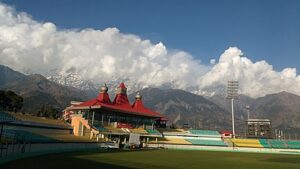 For Ranji Trophy and other domestic matches, the stadium served as the home ground for the Himachal Pradesh cricket team. As the home venue for Kings XI Punjab, the stadium has also hosted some IPL matches. The gorgeous location is unusual in India because it is 1,457 meters above sea level and has snow-capped Himalayan mountains in the background. When it rains, and snow, the mountainous terrain and harsh winters make getting to Dharamsala from the adjacent Kangra Airport, roughly 8 kilometres distant, a hindrance to scheduling frequent matches. During his stint as Director of the National Cricket Academy in India, Dav Whatmore advocated that the stadium be used for international cricket matches. The Pakistani cricket team was the first international team to play in this stadium when they played a warm-up game against an India A side in 2005.
On January 27, 2013, India and England played the maiden One Day International (ODI) at this stadium. The match was won by England by 7 wickets. From March 25 to March 29, 2017, India and Australia played the maiden Test at this ground. India comfortably won the Test match by 8 wickets.

The HPCA stadium, Maharashtra Cricket Association Stadium, JSCA International Stadium Complex, Saurashtra Cricket Association Stadium, Holkar Stadium, and Dr Y S Rajasekhara Reddy ACA-VDCA Cricket Stadium was chosen as one of India’s six new Test match venues in November 2015. This Dharamshala International Cricket Stadium is a lovely all-weather drive from our Rakkh Resort in Dharamshala. You can also see most of Kangra District’s tea gardens in and around Palampur. Dharamshala also boasts some tea gardens, most notably around Sheela Chowk and extending northwards to Khaniyara. Kunal Pathri has the remaining tea gardens. The tea is known as Dharamsala or Kangra tea, which is widely consumed in India and worldwide. Dharamshala is best known for Kangra green tea. Still, it now produces many teas, including black, green, oolong, and white teas and the popular Kashmiri Kahwa and Masala Chai.